I had only known about ‘LeWeb‘ Internet conference for three years, and always missed the chance to attend, until last year. This event brings the ‘crème de la crème’ from the internet world in terms of speakers, entrepreneurs, marketing directors and celebrities from the digital world. It is all about presenting innovation, discussing latest industry news, the start-ups and the opportunities for the start-ups, digital and social media, the social game industry, and the workshops.

The entrance fee to the LeWeb is pricey: €1995 for the full price, but €995 if you buy at early bird discount like I did. I have been looking forward to the event for the whole year, followed all
arrangements and plans, participated in comms with the community via Twitter, facebook throughout the year and got all excited.

It is clear that I missed quite a lot of good sessions during the two days event as it is a huge venue comprising 3 buildings and hundreds of debates, product showcase. So it is easy to miss important bits and bobs, for example I missed the Facebook workshops as they were constantly packed.

Yet, I hope that my recap will give you a good grasp for what you can find there if you decide to attend next year. But let’s move onto discussing some hightlights:

The start of the day took me to the building next along (Plenary II stage –Eiffel dock), a smaller but more homely building. I was looking for something more geeky and data-driven, so I dived
straight for: ‘Lean Analytics for Start-ups’ by AlistairCroll, from Bitcurrent.

The main goal of his presentation was to present key analytics for start-ups. Alastair explained the intent behind the analytics, having clear KPIs and the essentials of tracking things
like visits, bounces, etc… but also tracking other things like usability (eg: via heatmaps, form completion tools, use surveys….)

He then delved into the need for optimising your page load using an experiment he made on users which showed that a faster site always returns better user experience: more engagement, more visits per visitor, less bounces… point taken: users want faster navigation and sites. He briefly picks on community Managers stating that they should be there to analyse the start of the funnel and making sure that their work leads to meeting the objectives for the campaign.

The most important part of the presentation in terms of the analytics: ‘In a start-up the purpose of analytics is to iterate to a product/market fit before the money runs out’. Here’s some learning points:

Next on was the “Asia: Digital Life, Real Billions” where a group of Asian top entrepreneurs were interviewed. Amongst the panelists, we had :

I learned quite a bit about the Social gaming industry in Japan. One piece of data that really got my eyes opened was given by Takuya Miyata: apparently Japan’s No2 social network Gree spends 10 million $/month in TV commercials!

However, I think he said that it worked out at about $12 per acquisition, so advertising spent is even justified?

The next session on ‘How Social is Changing the Gaming Industry’ was a bit slow though it was interesting to hear from the panelists how they went about monetising, being Micropayments & advertising the two main revenue making models in the gaming industry. So I decided to cross over the road onto the Pullman Plenary Room. I stopped a few moments for coffee, some networking and also viewed some product demos at the stands.
I then headed for the ‘Start up competition Finals’ where I really enjoyed seeing the final 4 winning startups showcasing their ideas. I thought one of them was very imaginative and typical of a French mind: ‘Super Marmite’, a site to go to find out who’s cooking and willing to sell you a portion around your local area, request a visit to try whatever the person is cooking and arrive at the spot with your taperware, pay, eat healthy and socialise. The presenter was a young lad full of charisma who put a bit of humour on the session. I am glad they got the No1 prize on originality.

I was sad to see that no Spanish startups were competing with other French, Dutch and German startups… why are Spanish start ups not selling themselves outside: is it the recession, the lack of information, language barriers? Read more about the startups that presented at LeWeb on this TechCrunch post .

Jeremiah kicked off his presentation by saying : ‘you need to be where the money is and how you should spend your social media budget’. Wow! he then got everyone’s attention. It’s worth watching his video but if you cannot be bothered, here’s some of the main points of his presentation. 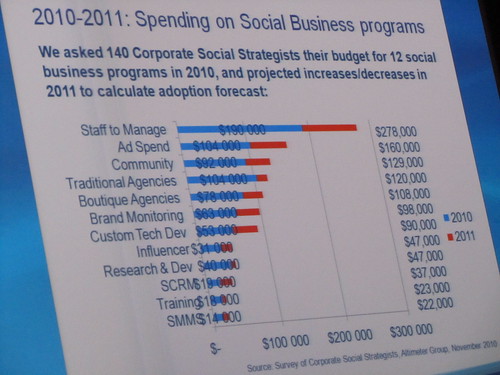 The biggest area of growth in 2011 is hiring people to run the programmes/campaigns on social media. We should invest in scalable social media programmes by:

This was the last session of LeWeb conference but probably one of the most entertaining, enjoyable and fulfilling. We were all tired but Gary Vaynerchuk woke us all up.
Gary knows how to draw the public’s attention by bringing an unusual, outrageous fun to the Q&A. Gary got the session started with some rants about social media stuff, the humanisation of
businesses, how they are starting to get closer to customers, talk to them, feel what they need, listen to them…. but Loic prompted him into the Q&A. The session can be viewed on LeWeb Youtube channel too.

The main highlight of his presentation arrived the moment someone asked: What is the ROI of social media? to which Gary replied:

‘what is the ROI of your mum’?

That one must have been one of the most tweeted phrases of LeWeb. LeWeb10 was over, and I guess everyone is now looking forward to LeWeb11

I was a great, fulfilling experience that got me inspired for days, however I didnt feel like I learned anything practical. My knowledge on the digital world definitely got enhanced as I found out about new things, but didnt get any takeaways with me in terms of practical advice, so perhaps this type of conferences are not for me.

I acknowledge the fact that this was not a search engine marketing conference and didn’t expect anything like that, but got a bit dissappointed of the poor or virtually no coverage that ‘Search’ gets at LeWeb, apart from a few mentions here and there by a couple of speakers, like Marissa Mayer.

Let me just add the impressive figures about network usage data at LeWeb: